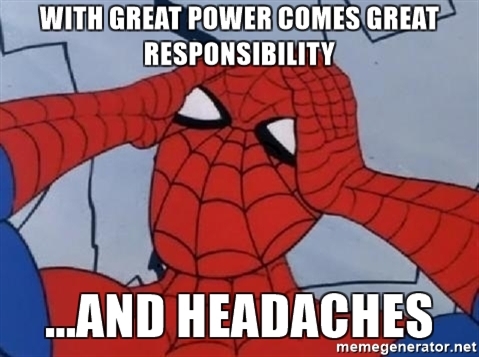 If you know who Spiderman is, then you must be familiar with Uncle Ben’s famous quote: “With great power comes great responsibility.” If you are a software engineer, then you can totally relate to Spiderman, whether you think so or not. No, we are not superheroes who can shoot webs from our hands. However, the most knowledgeable and capable people in the world are often presented with the most difficult ethical challenges, and we as software engineers are some of the most heavily relied-on individuals in society, especially in today’s world where technology involving some type of computer and software, is a huge part of almost every aspect of everyday life. The software we use daily without even thinking about it, in our phones, our computers, our cars, elevators, the websites we use to buy things online, the computer systems managing every purchase we make in any store, you name it, have just as critical a role in our safety and wellbeing as the physical bridges we drive on and the buildings we work and live in. Just like the civil and structural engineers who keep our cities structurally safe and sound, software engineers are burdened with the power to help, but also hurt, millions of people. The difference between them is that civil and structural engineers are very much aware of this fact, while software engineers often aren’t.

You’d be surprised at how many people there are, who are ironically more robotic in nature than the powerful AI’s that they create. Wait, did I just compare software engineers to robots, you ask? Of course I did. There are entire companies full of software engineers out there who make a living taking requirement sheets from clients and handing them software capable of doing anything that the client wishes in exchange for a nice check, in an almost machine-like manner. You put in a spec sheet and a nice stack of money, and out comes powerful software that does practically anything you want. They often don’t give the ethics of their software a second thought, because someone told them to do it, and someone paid them, and they’re just doing their job and everything’s fine. These “robot” software engineers are the best friends of sketchy industries, especially the marketing and advertisement industry, who take advantage of “trickery” in websites and apps to falsely advertise products. This trickery, which software engineers often aren’t even aware of, allows misinformation to spread rapidly to unsuspecting victims, and can even hurt them. Compare it to a vending machine for weapons, because it’s basically the same thing.

Ethics in software engineering is, to put it shortly, NOT being a vending machine for weapons. And the fact that ethics in software companies are often overlooked because they are not held liable, adds an extra-heavy load of ethical responsibility to software engineers’ already extra-heavy loads of other responsibilities. That makes software engineers a little bit like superheroes after all, because sometimes, we are the one thing that stands in the way between the innocent people and the bad guys, and that is why ethics is the last thing a software engineer should ignore. Sure, it’s a lot less stressful to sit in at your desk every day accepting requests and writing whatever software your clients and supervisors tell you to write for a living. But if you want to be an outstanding software engineer, you have to be a little more like Spiderman and realize that with your great power comes great responsibility. Be aware of villains who try to use your skills for trickery, and when you think this is happening, stand up for what is right!